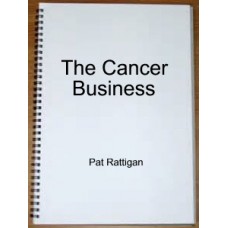 THE CANCER BUSINESS - "Second only to the petrochemical industry" by Pat Rattigan, 2003

The Dark at the End of the Tunnel

In Britain, at the present time, around one third of general hospital patients are suffering from cancer. Two out of five of the population have, or will develop, the disease. If we accept the figures, for cancer incidence, of 30 percent in 1980, 40 percent now and 50 percent in the year 2010, at the present rate of increase the figure will reach 100 percent around 2080. A multitude of factors suggest that the rise is set to accelerate.

The 5-year survival figures, for the major cancers are:

The cancer business is 2nd only, in size, to its big brother, petrochemicals.

If the same percentage of the overall disease bill applies in Britain as in the US, the current expenditure on cancer will be 3 to 6 billion £ per year.

With these kind of amounts involved it is quite understandable why the Drug / Radiation / Scalpel / Vivisection Cancer cartel have maintained a constant, ruthless campaign to suffocate, any / all attempts to introduce rational therapeutic regimes to deal with the species-threatening plague. The cancer epidemic has many causative components; virtually all of them either actively promoted by or ignored by the government health departments, the medical trade etc.:

To continue with this epic story (or one well researched version at least), please accept with our compliments this FREE download of Pat Rattigans' "The Cancer Business"

Should you have any problems please send an email to mail@kjay.com with "The Cancer Business Download Issue" in the subject line.