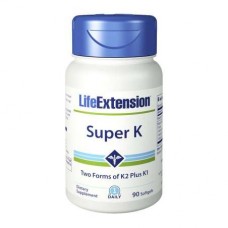 Supports a healthy vascular system. Reduces calcium deposition in the aorta. Maintains healthy bones in postmenopausal women. As people age, even a subclinical vitamin K deficiency can pose risks to the vascular system. Poor vitamin K status also results in increased circulating levels of undercarboxylated osteocalcin that is shown to be associated with increased bone loss in postmenopausal women.
Humans get most of their vitamin K from green vegetables in the form of vitamin K1. The problem is that K1 is tightly bound to plant fibre and only a small fraction absorbs into the bloodstream. Other studies suggest vitamin K intake not only blocks the progress of further calcium accumulation, but also induces 37% regression of preformed arterial calcification.
Ideal Forms of Vitamin K - In recent years, two forms of vitamin K2 have been extensively researched and the findings reveal vastly improved effects compared to K1. The MK-4 form of vitamin K2 is the most rapidly absorbed and is now routinely used in Japan to maintain healthy bone density. MK-4, however, only remains active in the blood for a few hours. The MK-7 form of K2, on the other hand, remains bioavailable to the human body over a sustained 24-hour period and to higher levels (seven- to eightfold) during prolonged intake.
Both MK-4 and MK-7 have demonstrated remarkable health benefits when studied in human populations. Poor vitamin K status leads to inactive uncarboxylated MGP (ucMGP), which accumulates at sites of arterial calcification. Since MGP is a potent local inhibitor of arterial calcification, MGP is important in relation to the health of the entire cardiovascular system. Without adequate vitamin K, calcium in the blood can bind to the arterial wall resulting in calcification.
Super K formula provides vitamin K1 and the MK-4 and MK-7 forms of vitamin K2 in just one daily softgel. This formula provides the precise amount of the long-acting MK-7 form of vitamin K2 that recent human studies have shown to provide optimal K2 levels over a 24-hour period. The MK-4 is included to provide the rapid increase in vitamin K blood levels.
Tags: vitamin k2, k1, softgel, calcium, vegetarian, supplement, vascular, menopause
Related Products (3)

We are aware that shiiping costs can be an issue and in some cases add a considerable percentage to the cost of your order. We aim to offer choices at a minimal price and do not pass on packaging costs to the customer. Shipping options will be shown before you complete your order. In Stock Orders processed & despatched within 48 hours (Mon to Fri)