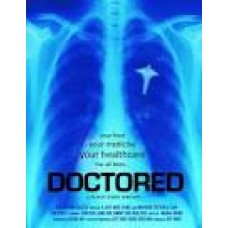 * Copies of DVD are Free & supplied in a protective sleeve.

The price you pay is to cover handing/packaging (Select Postage at Checkout).

During the summer of 2012, "Doctored - The Movie" was released. This documentary is one of the latest exposures of the way truthful medical procedures, nutritional strategies and more have and continue to be demonised by a modern often fraudulent medical system. A system which in the 21st century is no more than a business, which focuses more on making vast profits rather than having an honest aim to heal the millions of patients treated every year.

From the award winning producer who brought us "On Native Soil" this documentary focuses on the monopolization of our medical system. As more and more people and groups are learning about the agendas that control our main medical system there is a growing realisation on what the real truths are, there follows some quotes from various popular media publications.

LA Times > “An involving, well-crafted, humane look at a topic that stands to affect us all.”

THE VILLAGE VOICE > “Doctored frames the nearly century-long campaign against chiropractic care as a marketplace battle in which the stakes are dollars rather than health.”

People you never see, are behind the scenes performing well paid jobs to make every human into a pill popping, revenue generating profit centre - for life!. They work for a system that will stop at nothing to achieve it's aims and at all costs. "Doctored" uncovers the unseen in their investigation that took them to the highest level of western Medical Associations to reveal alarming (and sometimes unbelievable) levels of deceit and criminal activity. The question needs to be asked: Is most of what we know (or think we know) about modern medicine just highly polished marketing. This coming from companies that make profit from those who are in pain or who may cause the pain in the first place by "selling" a so called solution for any aliment they could turn into a lifetime profit stream.

The system does everything it can to stop us being told about the successes of natural therapies. This explains why so many people think chiropractors are "quacks," nutritional supplements are a waste of money and acupuncture is just a fringe therapy? The Medical Monopoly spends millions every year ridiculing, attacking and trying to discredit natural therapies.

The real answers to solve what ails us are almost beyond belief in most peoples minds. In most cases it's the less invasive, less expensive methods that are usually more effective. This Documentary is a a vital eye opening expose. A must see especially for those who may for one reason or another, caught in the net of the "Alopathic Medical Monster".

7TH FLOOR PRODUCTIONS - founded by John Brown, Kathryn Merritt, and Tate Denna who have dedicated themselves to support chiropractors in their financial wellness.

“Having fallen in love with the message of wellness, we want more people to understand how to reap the benefits of a significantly increased quality of life and well being.” 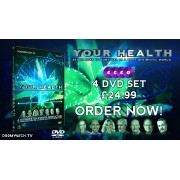