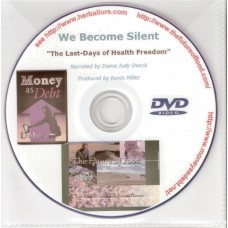 +++ Get three important documentary films for the price of one +++

Also on this DVD there are two other films related to how powerful interests continue to work to remove all freedoms of the human population.

1. WE BECOME SILENT - "THE LAST DAYS OF HEALTH FREEDOM"

This is a hard hitting documentary about the threat to medical freedom of choice.

This details the ongoing attempts by multinational pharmaceutical interests and giant food companies with the support of the W.T.O, W.H.O and others to limit the public’s access to herbs, vitamins and other therapies.

We Become Silent is narrated by Dame Judi Dench, the noted UK actress who has won multiple Golden Globe awards, an Oscar, and a Tony for her on-stage work, in addition to dozens of other honours throughout her prestigious career.

The Alliance for Natural health is a non-profit organisation that is committed to “protecting and promoting natural health through good science and good law.'

WE BECOME SILENT features the only known video from a Codex meeting, exclusive interviews with delegates to the Codex Alimentarius Commission, U.S. Food and Drug Administration officials, two U.S. Congressmen, actor Mel Gibson, and consumer health activists from across the globe.

2. THE FUTURE OF FOOD

Genetic engineering of food crops is as controversial today as ever, as many of the large agro corporations that use this technology position themselves as the answer to the world food crisis and further consolidate the seed supply.

The Future of Food continues to be a key tool used by activists and educators who call for increased attention to this issue.

This a 2004 American documentary film which describes an investigation into unlabelled, patented, genetically engineered foods that have been sold in grocery stores in the United States for the past decade.

Essential viewing on money and the banking system. Money As Debt is a fast-paced and highly entertaining animated feature by artist & videographer, Paul Grignon. It explains today's magically perverse DEBT-MONEY SYSTEM in terms that are easy to understand.

For evidence of this in the UK please visit the Bank of England website, at this link